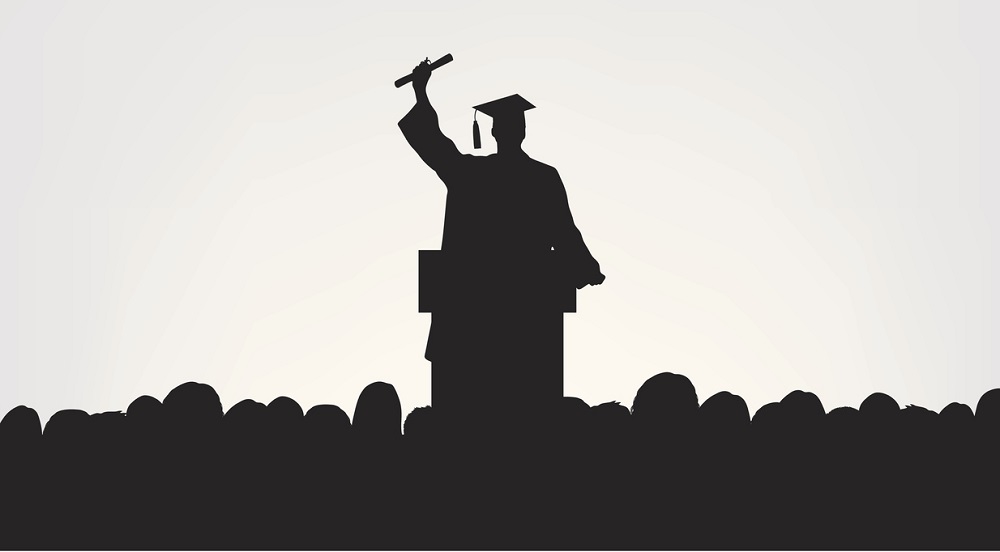 By now, you’ve probably seen the viral video of a Pennsylvania principal cutting off the mic of his school’s valedictorian during his graduation speech.

As the Washington Post reports, Peter Butera—who is the school’s class president as well as valedictorian—gave the speech at Exeter, Pa.’s Wyoming Area Secondary Center. Towards the end of his speech, Butera veered off the script previously submitted to administrators and used the opportunity to criticize a student government that he saw as powerless and a certain set of “authoritative” teachers and administrators who he felt discouraged strong student voice.

With that, Principal Jon Pollard cut the speech short and ordered Butera to sit down.

The incident not only drew support from many of the Wyoming area students and parents, who gave Butera a standing ovation, it also drew the support of television personalities and social media.

This week, late night host Jimmy Kimmel invited Butera on his show to finish his speech in front of a national audience. Check out the full video below:

It’s easy to find Butera inspiring. The sight of a student standing up to “the man” and calling for students to empower themselves is like a scene out of a nostalgic teen movie.

And, in the emotion of the moment, it might be hard to understand that, in many ways, Principal Pollard was really just doing his job. In a statement released after the incident, Pollard said he was concerned that Butera might direct derogatory language toward other students or faculty. When Butera went off-script, Pollard felt he had no choice but to end the speech before any offenses could occur. The limits of free speech in K-12 schools have long been debated, but it isn’t all that unusual for schools to censor student speech.

For more on giving students a strong voice, sign up for the TrustED newsletter.

To be fair, Butera did break the rules. Despite submitting his speech for approval, he did go off script. It’s difficult to know whether Butera voiced the concerns he mentioned in his speech to school staff prior to the event.

Either way, it’s clear that as a student, Butera felt ignored. And, at least judging by the ovation he received, so did many of his fellow students.

If nothing else, the incident highlights an important conversation school district leaders should encourage among staff, faculty, parents, and students. In today’s education environment, where personalized learning, social-emotional competencies, and individualism are powerful forces for student success, the power of student voice cannot be underestimated.

While Butera may not have gone about making his voice heard according to the rules, his message of student empowerment and engagement is one all school leaders should consider:

“Despite some of the outstanding people in this school, a lack of real student government and the authoritative attitude that a few teachers, administrators, and board members have, prevents students from truly developing as leaders. Hopefully in the future, this will change. Hopefully for the sake of future students, more people of power within this school, who do not do so already, will begin to prioritize education itself as well as the empowering of students. Because at the end of the day, it is not what we have done as Wyoming Area students or athletes that will define our lives, but what we will go on to do as Wyoming Area Alumni.”

What do you think about Butera’s speech? What steps are you taking to encourage strong student voices and engagement in your school or district? Tell us in the comments.