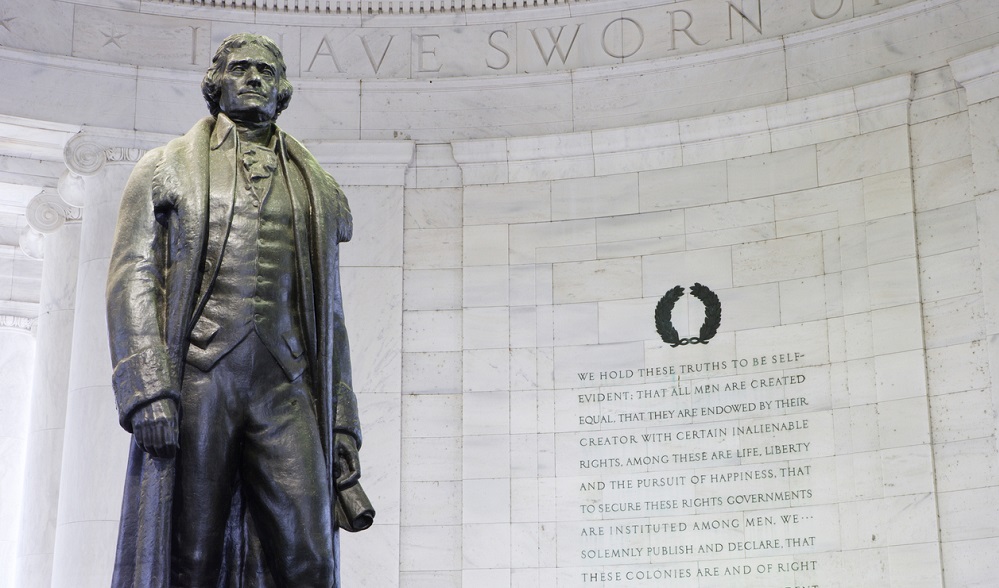 Thomas Jefferson, the Declaration of Independence, and why education and democracy go hand-in-hand

“We hold these truths to be self-evident, that all men are created equal, that they are endowed by their Creator with certain unalienable Rights, that among these are Life, Liberty, and the pursuit of Happiness.”

Perhaps no other words in American history so succinctly describe our national identity.

Despite his role as President of the United States, governor of Virginia, and founder of the University of Virginia, the composition of much of the Declaration of Independence is the enduring legacy of Thomas Jefferson.

Two-hundred-forty years ago this week, Jefferson was tasked by his fellow founders with summarizing the colonies’ grievances against the British crown and declaring their rights to pursue freedom and self-government.

With independence declared, Jefferson returned home to Virginia as a delegate with an eye toward reshaping the laws of his home state to better align them with the ideals of the revolution. It was during this time that Jefferson proposed a new approach to education that allowed all free children, no matter their social class or wealth, to attend public schools.

In 1778 and 1780, Jefferson put forth Bill 79, “A Bill for the General Diffusion of Knowledge,” which called for the establishment of a system of school districts tasked with educating local students.

At the core of the bill was the idea that widespread education for all was key to preserving a free, self-government:

“Whence it becomes expedient for promoting the public happiness that those person, whom nature hath endowed with genius and virtue, should be rendered by liberal education worthy to receive, and able to guard the sacred deposit of the rights and liberties of their fellow citizens, and that they should be called to that charge without regard to wealth, birth or other accidental condition or circumstance… it is better that such should be sought for and educated at the common expense of all, than that the happiness of all should be confided to the weak or wicked.”

We should caveat this by remembering that Jefferson’s vision of education for all was limited by his own prejudices. This was a time when slaves were not even treated as people and women were not given the same rights as men. Jefferson himself was a slave owner.

As with the Declaration of Independence, Jefferson’s radical vision for “education for all” was still restricted.

But the idea that an educated public would strengthen democracy still holds.

Despite his best efforts, Jefferson’s education bill did not pass. According to the Jefferson estate, a modified version of the bill would finally pass the Virginia assembly in 1796. But Jefferson’s vision set the stage for a broader education movement in the 1800s and it helped lay the bedrock for the system of public schooling we still have today.

Throughout this weekend, as we celebrate our independence, let’s take a moment to remember the vital role public education plays in preserving our freedom.

As Jefferson wrote about public education in a 1786 letter to fellow Virginian and founding father, George Wythe, “No other sure foundation can be devised for the preservation of freedom, and happiness.”

Have a safe, happy, and healthy July 4th weekend. TrustED will return with a new post on Wednesday, July 5.