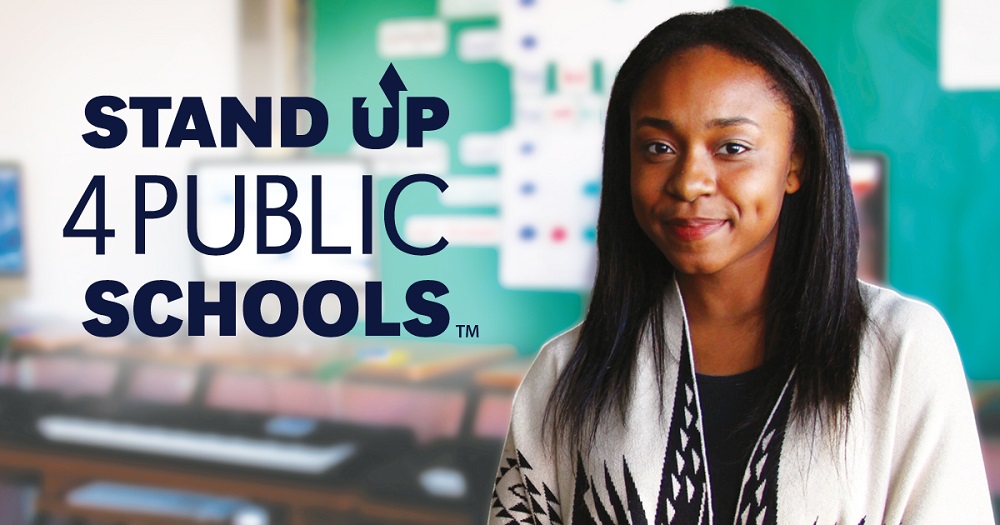 Q&A: NSBA’s Tom Gentzel on why it’s more important than ever to stand up for public schools

School choice advocates continue to cast public schools as “failing” and “old-fashioned.” Amid the hubbub, a growing chorus of advocates, educators, parents, and students is pushing back on that narrative.

Their collective goal: To give voice to the success, progress, and vital importance of America’s public schools.

At the forefront of this movement is the National School Boards Association’s Stand Up 4 Public Schools campaign, a combination of videos, posters, and social media that highlights everyday successes of students and teachers in America’s public schools.

We recently sat down with NSBA Executive Director and CEO Tom Gentzel to talk about the new campaign and what its success says about the nation’s changing education landscape.

Q: What is the Stand Up 4 Public Schools campaign? What are its main goals?

A: We launched this campaign to talk about the great things that are happening today in public schools and to use student voices to tell the story.

It’s very interesting to me that when you look at the Gallup poll every year, people don’t necessarily give the public school system as an institution very high marks, but they always give their schools high marks. There’s something there. There’s something about that that’s really intriguing. What we’re trying to do is build off of that.

Q: Why is it so important to stand up for public education in today’s environment?

A: It’s a great question and I think there are a couple reasons.

One is that I think generally we take the institution for granted sometimes. It’s important to remind people what a valuable asset public education is to our country.

The other reason is that we know we’re looking at the prospect of choice and voucher programs and other efforts—both at the national level and in various state legislatures—to divert money from public schools to support other options.

We’re trying to do two things. One is to say there’s already a lot of choice within the public school system and, frankly, I don’t think we’ve done a good enough job of talking about that through the years. So, we’re going to be focusing on that. But also, we’re trying to underscore the point that most of the children in America go—and will continue to go—to public schools, and they’re doing a really good job.

Q: What are some of the things that excite you about public education moving forward?

A: I think there are several really important things.

One that I feel personally passionate about is that public education is an important institution in our democracy. I don’t mean that in just a lofty way. Public education plays a “melting pot” role, assimilating people into our society, giving students from a variety of backgrounds exposure to different cultures and helping them learn about each other.

I am actually concerned about what we’re seeing right now. There’s sort of a re-segregation happening in schooling in America. People are retreating to their own groups. I think that’s very concerning for us as a society that’s constantly changing.

The other is I think public schools are fundamentally a community institution. They’re a community asset. That’s why school board leadership is so important. And, we need to remind people of that. I think most people sort of know it. They talk about the quality of schools in their community.

I often say public schools are a birthright, but they’re not guaranteed. By that I mean everybody has a right to go to public schools to get a free publicly-funded education. But the institution doesn’t just perpetuate itself, it has to be continuously renewed and I think it’s under threat right now. We have to tell its story.

By the way, when it comes to the campaign, we don’t have a bucket of white paint and say “Everything is perfect.” It’s a human institution, it’s not perfect, and certainly there are some schools that are challenged in terms of resources or meeting the needs of students. But, we should be focusing on helping those schools rather than, frankly, undermining them with the proposals that we’re seeing.

Q: Is there anything individual districts can do to further demonstrate their importance to the local community?

A: One of the secrets of effective governance is for school leaders not to think of the term “general public.” In every community, there are publics. There are folks who have different interests. One of the keys is to make sure there is meaningful connection with all of those groups in that we’re listening to what their needs and expectations are and we’re trying to make sure the schools are addressing them.

The role that school boards play is one of the most important ones. It requires them to be honest in vigorous discussions about issues. I’ve been in plenty of places where people talk about a debate that happened at the school board meeting last night. But, that’s not a sign of dysfunction. The dysfunction is if they can’t make a decision. There really ought to be a vigorous debate at the school board table if there are competing interests. The question is what do you and how do you address those interests. And, that’s the community leadership role that boards have to play. I think it’s really the most important.

What do you think of Gentzel’s comments? What steps are your schools or local community members taking to stand up for public education? Tell us in the comments.