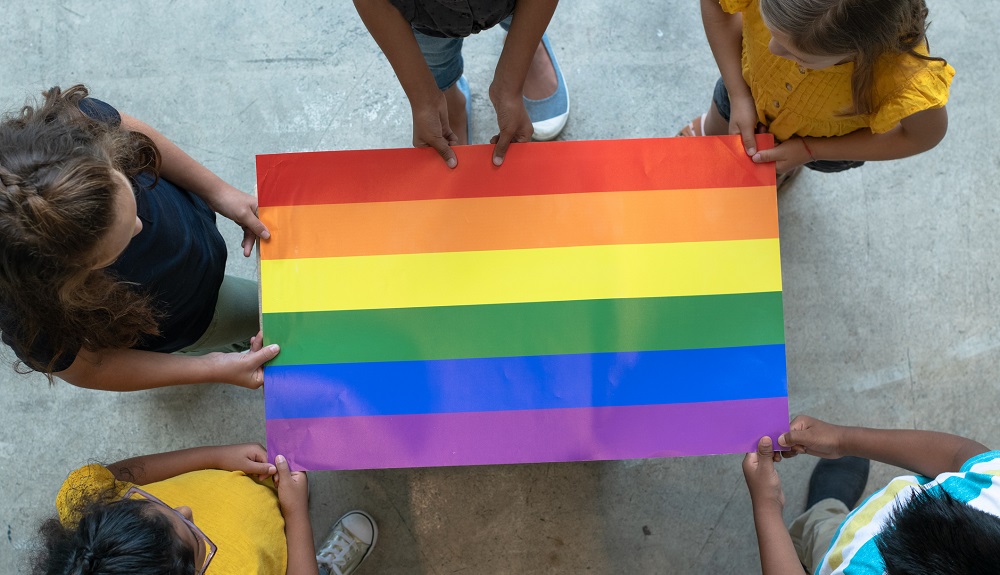 Pride Month: A is for ally

The U.S. Supreme Court surprised many this week when it handed down a landmark ruling that said language in the 1965 Civil Rights Act applies to discrimination based on gender identity or sexual orientation.

The ruling essentially says that employers cannot fire someone on the basis of their sexual orientation or gender identity and for the first time mandates job protections for LGBTQ teachers and other workers across the country.

Whether coincidence or not, the timing of this important ruling should be noted.

June is LGBTQ+ Pride month–an important time to honor the progress and sacrifices members of the LGBTQ+ community and its allies have made to advance equity for all identities—work that is critical for ensuring children’s safety and wellbeing in schools. During this celebration of LGBTQ progress in the United States, demonstrators across the country would generally take to the streets. The marchers, both LGBTQs and allies, fill the streets with rainbow flags and floats both to recognize the rights they’ve earned and to look to the future.

Of course, this is no normal year.

Just as the COVID-19 virus has spurred us to rethink health and wellness in the United States and the recent unrest over the murder of African-Americans at the hands of police officers has brought a much-needed reckoning over systemic racism, this Pride Month should be a time to re-examine the role of an ally in movements towards equality.

In a society that stigmatizes those who are not a member of the majority or dominant group, it is important for those that have privilege to act in allyship. When I think of LGBTQ+ allyship, I am reminded of this image created by Danielle Coke:

Being an ally doesn’t necessarily mean you fully understand what it feels like to be oppressed. It means you’re taking on the struggle as your own. Acting in allyship is when an individual, sometimes a member of the majority or dominant group, speaks out and acts in solidarity with a person or group that is targeted.

Being an effective ally requires significant self-reflection and a strong sense of self-identity. Any educator can become an ally, but the journey might look different depending on one’s identity, experience, and familiarity with issues of power and privilege.

Eighty-three percent of educators felt that they should provide a safe environment for their LGBTQ students—by displaying visible symbols of allyship support or disciplining students for using homophobic language, for example—only half had taken action to do so, according to the Gay, Lesbian and Straight Education Network (GLSEN), an organization that helps K–12 schools create safe environments for LGBTQ students.

In addition to supporting individual LGBTQ students, those acting in allyship challenge anti-LGBTQ behavior and work proactively to ensure safer, more inclusive schools for all students.

I’m not going to sugarcoat this: the work of an ally is hard. It requires commitment and a constant re-examination of your role. Even experienced allies aren’t always sure what to say or do. But the following “do’s and don’ts” can keep you on the path to being a source of support and empowerment.

Do listen and ask how you can help.

One of the simplest yet most important ways to act in allyship is to listen. Like all students, LGBTQ students need to feel comfortable expressing themselves. If a student comes to talk to you about being harassed, feeling excluded or just about their life in general, keep in mind that you may be the only person they feel safe speaking to. Be there to listen.

Don’t expect another person to educate you about their identity.

Effective allies periodically brush up on LGBTQ-related language and current issues facing the LGBTQ community. Do not expect to be taught or shown. Take it upon yourself to use the tools around you to learn and answer your questions. Do your research to learn more about the history of the struggle in which you are participating.

It is important to avoid making assumptions and perpetuating stereotypes. These can be extremely offensive and may turn a student away from you. It is also important to avoid assuming you know what the student needs. Be sure to listen to your student and ask how you can support them.

Learn how to listen and accept criticism with grace, even if it’s uncomfortable. If you refuse to acknowledge that your words and actions are inherently shaped and influenced by systemic oppression, you’re setting up yourself to fail.

Do use inclusive language.

Through casual conversation and during classroom time, make sure the language you are using is inclusive of all people. When referring to people in general, try using words like “partner” instead of “boyfriend/girlfriend” or “husband/wife,” and avoid gendered pronouns, using “they” instead of “he/ she.” Using inclusive language will help LGBTQ students feel more comfortable being themselves and coming to you for support.

Do be conscious of your biases.

Effective allies acknowledge how homophobia, transphobia, and heterosexism may affect their efforts to be an ally to LGBTQ people. They continuously work to recognize and challenge their own biases.

Don’t apologize for the actions of your identity group.

Let your actions inform others. Use the appropriate terms such as lesbian, gay, bisexual, transgender, queer, or LGBTQ and correct people when you hear incorrect or derogatory language. Use gender-neutral pronouns and LGBTQ inclusive language in school. Intervene when anti-LGBTQ behavior occurs and show other educators how to advocate for changes within the school.

Do seek support from experienced allies within your identity group.

Do not feel you must always have the answers. If you are faced with a problem you don’t know how to solve, let the student know you will look into the subject to try and find an answer. Sometimes the best thing for you to do is to refer the student to an outside source that may be able to help them.

Don’t expect credit for being an ally.

Do not participate for the gold medal in the “Ally Olympics” (you don’t need to compare how your struggle is “just as bad as” a marginalized person’s). Do not take credit for the labor of those who are marginalized and did the work before you stepped into the picture

Don’t selectively support one group over another.

The first step in advocating for changes in your school is to assess the current state of your school. This will help you focus your efforts and identify areas for improvement. You can examine your school in-depth by learning about people’s experiences in your school and examining your school’s existing policies, practices and resources.

The road to becoming a strong ally is hard. But thankfully, once you understand how to become an ally for one marginalized group like LGBTQ students, you should have the skills to apply that strategy to support others.

In order to turn this moment into a movement, where all of humanity has a stake and responsibility to fight for justice, we must have difficult conversations and discuss tangible ways to move from ally to advocacy. I became an educator and k-12 administrator because I wanted to change the world…but I know I can’t do it alone.

If you’re looking to become an ally, but feel lost. A great place to start is to make your own ally commitment and develop one for students and staff in your school. Below is my re-commitment to this important movement. I hope you join me.