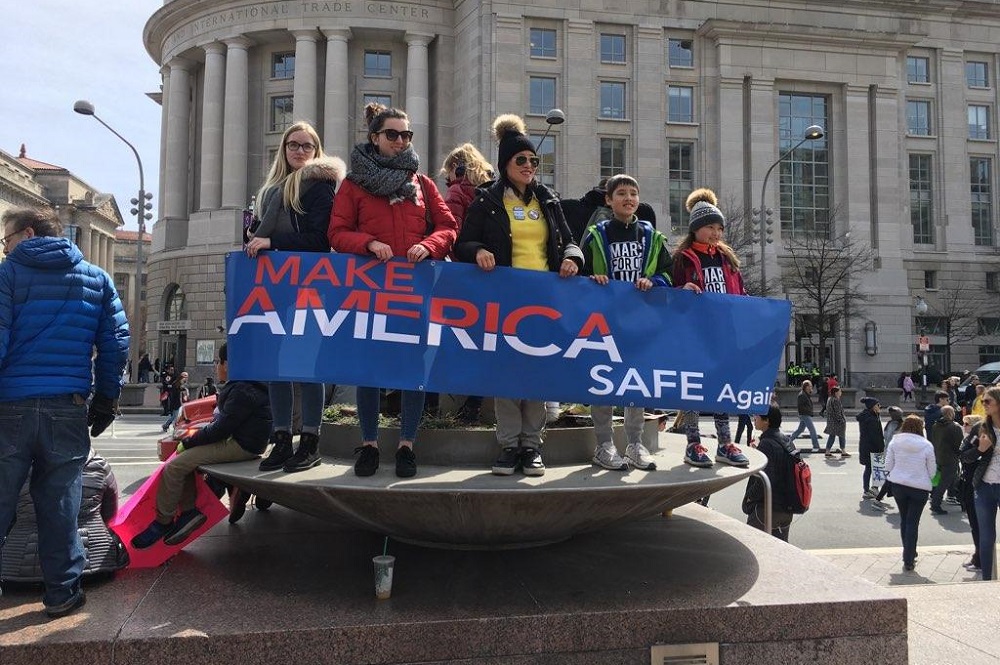 At March for Our Lives, students seize control of gun debate

On February 14, 2018, a gunman opened fire at Marjory Stoneman Douglas High School in Parkland, Fla., killing 17 people in one of the deadliest school shootings in history.

It wasn’t the first school shooting. Sadly, it isn’t even the most recent.

On Thursday, March 22, 16-year-old Jaelynn Willey died from complications from a gunshot wound suffered after a fellow student opened fire in a hallway at Great Mills High School in Southern Maryland.

In fact, in the 38 days since Parkland, the not-for-profit Gun Violence Archive estimates that at least 73 teenagers have been shot dead from gun violence in their communities.

On Saturday, hundreds of thousands of students, parents, teachers, and advocates marched on Washington, jamming the streets from the White House to the Capitol with a one-word message for policymakers:

I was one of them. As a journalist and writer living in the nation’s capital, I have attended my share of protests—usually as an objective bystander. My aim has always been to tell the story, not to participate in it.

On Saturday, my wife and I scrawled simple messages onto neon poster board. We wrote things like “Books not bullets,” “Arm teachers with knowledge” and “Inaction kills kids” and we marched the mile or so from our front door, past the crowds outside the White House gates to the Capitol—or, as close as we could get by lunchtime.

We listened to the brave teenage organizers—most of them survivors of the Parkland shooting. We raised our signs high when Stoneman Douglas student Cameron Kasky called on policymakers to get tough on gun violence, or “get voted out.”

We stood in rapt attention as the brave Samantha Fuentes, with shrapnel from the Parkland massacre in her face and a bullet wound in her thigh, vomited on stage and kept right on going, pleading with lawmakers to ban assault rifles like the AR-15 and limit gun ownership to the “hands of the reasonable.”

We bowed our heads and felt uncomfortable as Emma Gonzalez, one of the most outspoken student voices in the wake of the Parkland shooting, stood in silence for more than six minutes to commemorate the full length of the attack.

Seventeen dead, and at least as many injured—in six minutes. All because a troubled former student got his hands on a semi-automatic weapon and walked into a school.

The power of student voice

If it wasn’t obvious before Saturday’s March for Our Lives, it is now: There is a clear and present danger in our schools and in our communities.

We’ve known it for years—since Columbine and Virginia Tech and Sandy Hook. But, unlike the brave students who organized in Washington and around the country this weekend and in the days since Parkland, we have repeatedly let politics and petty divisions keep us from the pursuit of a single, universal truth:

No student should go to school in fear of their own life.

If the survivors of Parkland were telling us anything Saturday, it was that the so-called adults in the room have failed them—hopefully, for the last time.

Across the country, our schoolchildren, most of them not yet old enough to vote, are scared and frustrated and angry. Assuming the politicians and leaders who have promised to protect them are unable or unwilling to live up to that promise, they are ready to raise their voices louder and lead the change themselves.

They have finally had enough. The question now is: Have you?

Did your schools participate in the March for Our Lives this weekend? What steps are you taking to amplify student voices in conversations around school safety? Share your stories in the comments.

The opinions expressed in this column are the author’s.